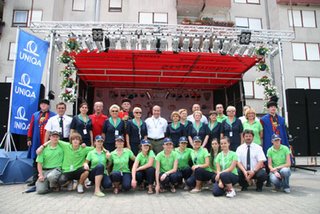 June 28th, 2006 - The 2006 FIS Roller Skiing World Cup kicked off in Croatia on 23rd- 25th June. Taking place in Oroslavje, the first of the four World Cup weekends included an uphill mass-start race in Bistra, a World Cup premiering team sprint race, and an individual sprint race. The tough uphill race in classical style counted almost 60 competitors representing eight countries. In the team sprint race in the free technique, held on a two-kilometer loop circling around the center of Oroslavje, the two-member teams from Italy and Germany left all the others behind in all the various categories. The final sprint race was staged on a 180 meter-track in a very hot weather on Sunday.

This weekend, on 1st – 2nd July, the FIS Roller Skiing World Cup will move to Presolana (ITA), near Bergamo. The schedule there will include two uphill races (one in each technique) and a night-sprint.

The third stage of the World Cup will take place in Yaroslavl (RUS) on 5th-6th August, also awarding the European Championships. This year's World Cup season will end with the Transjurassienne (FRA) on 16 – 17th September, a mass start race mimicking the world-famous cross-country competition held there each winter.

Posted by Rédacteur at 5:13 AM No comments:

This years season of FIS Rollerski World Cup has been opened with up hill race in Bistra. In very warm conditions, racers in five categories were on race track. Organisers, Municipality of Bistra and Ski club Oroslavje have been preparing race track in total lenght of . The track was extremly demanding. For the race it was more than 80 competitors entries, but chalenge of hot day and demanding race track excepted 57 competitors from eight countries. The race had mass start, and first on the start were ladies.

In junior female category first three places were taken by Germans; Louis Wolf, Julia Kockritz and Theres Wolf. Winner of the senior female category was Viviana Druidi from Italiy. Second was Kelime Aydin from Turkey and third Erika Bettineschi from Italy. In junior male category the winner was Glauco Pizzutto from Italy who beat Sebastian Bach from Germany on second place and Izzet Kizilarslan from Turkey on third. Alfio Di Gregorio showed the best form in the first World Cup race by winning it. Second and third were also Italians Valerio Theodule and Christiano Ivaldi. In the masters race, the winning place had gone to Hungary to Laszlo Miskolczi who beat Italian Stefano Corradin and Russian Leonid Golobkov.

First time in FIS Rollerski World Cup we had one team sprint race. Two members of the team were driving around centre of the town in lenght of two kilometers. We saw really well races. In each race, leading group was formed and in tactical battle for better final position competitors had very tight results. All races were decieded in last meters in final sprint. Junior male, junior female and senior female were driving tree laps, senior male, five.

Hot morning and long race track in the city center was waiting rollerski competitors in the last race of World cups first stage in Croatia. After we had repeated sprint qualifications, best female and male category were in the final. As we expected Bogatec family, Mateja and David, was quickest in qualifications. At the end in female category the winner was (Italy) who beat compatriot Anna Rosa with 42 hundreds od a second. In B final german junior Julia Kkritz (with that result winner in junior female category) beat Marina Firsova from Russia. In male category we had complete Italian dominationa with four competitors in semi finals. In final race, small surprise. We expected David Bogatec's win, but Alessio Berlanda was faster for 28 hundreds of a second. In B final Emanuele Sbabo was better than for only small 8 hundreds of a second. When results in senior and junior category were separated, winner in junior category was Folco Pizzutto from Italy.

That's the end of the this years FIS Rollerski World Cup race in Oroslavje, Croatia. Organizers are satisfied with the job they have done, and we belive that guest are also pleased with three days in Croatia. Thanks all for your cooperation and see you next year.

Posted by Rédacteur at 1:55 AM No comments:

Fabio MAJ at the World Cup in Italy 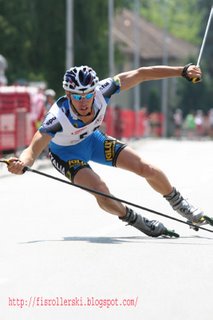 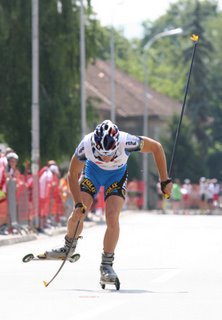 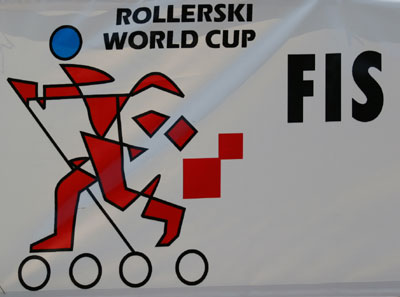 Give us your opinion, let's talk ! 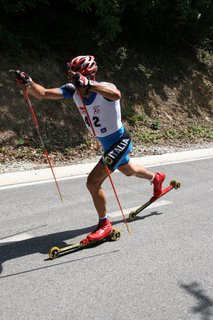 The purpose of this blog is to exchange ideas and comments about the Rollerski World Cup so do not hesitate to give your opinion in French, English, German, Turkish, Italian or Russian!!!

My first comment will be about the opening ceremony, it was the best I ever sawn! And I am still thinking that in the future should think about organising the World Championships!

SOME PICTURES OF TODAY RACES UP HILL CLASSIC STYLE 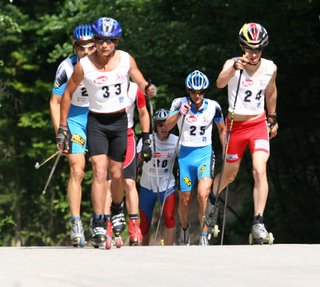 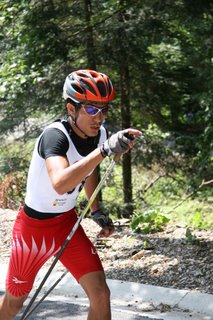 Posted by Rédacteur at 10:21 AM No comments: 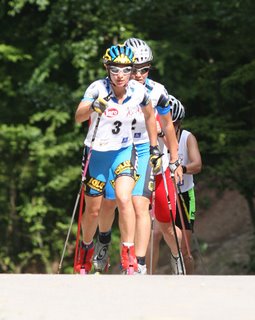 As usual Italian, Russian and Graman teams are the strong ones !
Posted by Rédacteur at 9:23 AM No comments:

Posted by Rédacteur at 8:51 AM No comments: