Second stage of the Rollerski World Cup 2009 in Germany close to Leipzig at Markkleeberg, here some pictures from the week-end. 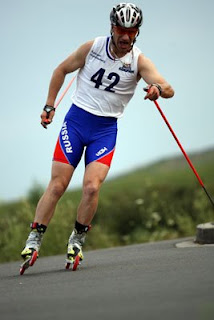 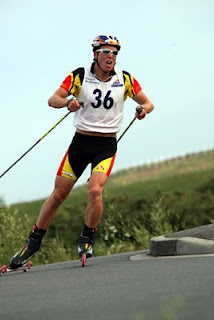 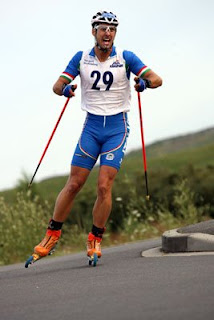 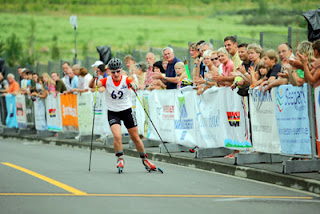 On long course from Stubicke Toplice (Pila) to Sljeme started first race of this years FIS Rollerski World Cup. Hosts from Ski club Oroslavje were very pleased with fact that their „homeboy“ Filip Kontak won a junior man race. On second place were Alexander Krivolapov (), and third were Stefano Paganessi ().

In junior women category winner was Lada Strukova () in front of Cynthia Wiegand () and Nastja Gradisar ().

In senior men category Alfio Di Gregorio () booked one of his many victories. Second and third were also members of Italian team, Simone Paredi and Sergio Bonaldi.

On second day of FIS Rollerski World Cup on schedule was mass start race on the Oroslavje’streets. On long course in the town centre we had 69 competitors in four categories. On a so hot day, as today was, competing is not easy. But, we only had one competitor who gave up.

First on a course were junior and senior women on long race. In junior women category Cynthia Wiegand () has won, followed by Lada Strukova () and Angelica Tagliati ().

In senior women category the winner was Ana Lazareva () in front of Elena Ektova () and Anna Marie Straub ().

Junior men race was very tied, because all competitors were in one group from start to finish. At the end the victory goes to to Gianluca Lorenzini. Second was Viktor Karasev (), and third his compatriot Maxim Giniyatov.

The senior men race was game of tactics. Lots of leaders, two tries of escape, and at the end tied finish. The best in final sprint was Igor Glushkov () in front of Emanuele Sbabo () and Vladimir Fedulov ().

The last day of FIS Rollerski World Cup we had sprint race. On the well known race course in the town centre we had nice competition.

Winner of the sprint race in junior women category was Nina Broznic from . She beat in the final Angelica Taglicati from . Third was Nina Willert ().

In junior men category victory is going to . The fastest on the track was Ivan Trofimov. He beat Florian Hävermayer (). Third was Aleksander Krivolapov ().

The fastest senior lady was once more time Mateja Bogatec from . She was faster than Inna Zaytseva from in the final. Third place goes to Elana Rodina ().

With sprint race the FIS Rollerski World Cup was over.

With normally 7 stages, but due to the crises and the lake of motivation and cooperation at the FIS level, we will finally have only 4 stages and the World Championship at Piglio, Italy in September.

Rollerski wants to play as his big brother but without the budget and organisation.
In one country, Italy, rollerski is really a discipline with a federation, a budget, a team, but if we look carefully worldwide, rollerski remains a training sport…

It’s a pity, in the 3 ultimate’s World Champions we were having Giorgio Di Centa 2007, Vincent Vittoz 2003 and Jan Jacob Verdenius 2000, all of them are/were competing at the top level in winter, Di Centa is Olympian, Vittoz won the World Championship pursuit in 2003 after is title in rollerski and the Norwegian Verdenius was the first XC Sprint World Cup winner ever!

So in winter media and sponsors are focused on them and in summer, they look like poor amateurs evoluting on an amateur circuit…

Aure and Kristiansund in Norway will host the World Championship in 2011, maybe that Norway, the leading country will understand importance of the discipline for the development of xc-ski…

But it seems that Croatia with live coverage via National TV of the ultimate World Championship, Italy with Di Centa and national team members always present on the main events and on the World Cup stages to promote themselves or France with Vittoz and the national circuit Rollerski Tour or Macadam’ski understood it 15 years ago…

But, I guess that future of rollerski should find is own way, with a short circuit of 3, 4 shows/stages more like biathlon rollerski cup with extreme simple rules and friendly TV formats still inside FIS but with a new leader helped by an ambitious team.
Posted by Rédacteur at 1:20 AM 1 comment: