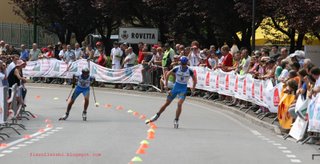 At the opening race of FIS Rollerski World Cup wins Alfio di Gregorio as well as the italian team. In women's race the success goes to Kelime Aydin from .

1st July 2006 FIS Rollerski World Cup weekend has started in at Presolana in Alta Val Seriana (). The Italian Team has demonstrated to be the nation to beat, thanks to the great performance of Alfio di Gregorio/ITA who wins the first race, the uphill race from Dorga resort to the mountain Monte Pora () in 27'47'' with a distance of 1'23'' to his team mate Valerio Theodule/ITA and 1'27'' to the third Italian Cristian Ivaldo/ITA. An Italian podium. Good race for another Italian (nordic skier) Bruno Carara/ITA , who has competed using his training rollerski (slower than the race one), who gets the fifth place al 12'' from the podium, anticipated by Nicolas Terrier/FRA. In between women's race a good surprise comes from Kelime Aydin/TUR in 35' front of Valentina Kislukhina/RUS and Anna Rosa/ITA.

and Anna Rosa are the winners of the senior sprint race of Rollerski World Cup. In between Juniors success goes to Kenny Assan/GER and Julia Kockhritz/GER. And tomorrow the uphill skating race from Cerete resort to Onore resort, but also competing in the race the age group and rollerski fans.

Rovetta (BG) 1st July the second race of FIS Rolerski World Cup set up for this weekend in at Presolana in Alta Val Seriana (), Italian and Germans get the best sprint results. On the track of di . on the border of two resorts, Rovetta and Fino Del Monte, the Italian and German Team win a 2x2, two races each. Italians in the Senior category, thanks to and Anna Rosa, who have won over another great rollerski team, Russia. Igor Glushov (2005 World Cup), and Marina Firsova.

German leadership in junior category thanks to Kenny Assan (1) and Marcus Erler (2), and bronze goes to Glauco Pizzuto/ITA. German get podium with Julia Kochritz and Therese and Luis Wolf.

With regards to the age group race nordic skier Fabio Maj has run the race telling rollerski experience at tv cameras of an Italian satellite tv.

Unione dei Comuni della Presolana ( - ) 2nd July 2006 - The flag for international rollerski are green, white and red, the coulors of . In FIS Rollerski World Cup held this first weekend of July in the mountain resorts of Presolana, Italians have demonstrated their sport value.

Starting from Alfio di Gregorio/ITA, who dominates the senior uphill race in free technique of (from Cerete Basso village to Onore village), since the first meters, with a distance of almost 29 seconds from Muhammet Kiziarslan/TUR. Third place in senior race to /ITA with 45 seconds of distance from his captain.

With regards to women senior race success goes to Viviana Druidi/ITA in sprint on the finish line with teammate Anna Rosa/ITA with just few centimeters of difference, third place to Valentina Kislushina/RUS at only 4 seconds from the winner.

Side event of Presolana FIS Rollerski World Cup 2006 organized by PromoeventiSport together with ski clubs of Lissone, Colere and Rovetta, the Presolana Skiroll Day promotional event won by Andrea Stella/ITA (ex rollerski national athlete) over Pietro Broggini/ITA (cross country junior world champion more then 10 year ago ). Kezia D'Incal wins the women category over Marta Sironi/ITA. At the start allined also Fabio Maj who has participated in a unique way, special guest and speaker attending himself the race. Through his microphone he has tell the race and the rollerski world to the television cameras throughout the entire competition.

The Presolana FIS Rollerski World Cup 2006 is now over. An exciting experience for the Organizing Committee coordinated by Giovanni Bettineschi of PromoeventiSport, which has allowed to fix the organization for next year great sport event, FIS Rollerski World Championships 2007 set up from 30th August to 2nd Septmeber 2007.

Rollerski athletes will rest for a month and then we'll meet them again at next World Cup in from 4th to 6th August, with Italians who would like to confirm their leadership, as this event also assigns the European titles.